Narendra Modi is slated to address a mammoth gathering at Ainthapali PHD Ground in Sambalpur today.

The meeting would be attended by people from five Lok Sabha constituencies of Western Odisha – Sambalpur Bargarh, Bolangir, Kalahandi and Sundergarh.

The state BJP is trying its best to extract the maximum out of the Gujarat strong man’s visit and revive its fortunes in its lost fortress-western Odisha.

Sambalpur SP Prateek Mohanty said full proof security measures have been taken ahead of Modi’s rally. “As per the instruction provided by the union home ministry, three tire security arrangements have been made for the rally. National Security Guard (NSG) along with about 100 cops from Gujrat police and Odisha police would be deployed for the rally. A DIG rank official from Gujrat police, Northern Range DIG will monitor the security concerns,” Mohanty said. 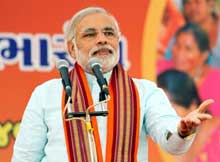 The Odisha unit of the saffron party which is in an upbeat mood, expects a gathering of at least two lakh BJP loyalists and supporters at the rally.

This is Modi’s second visit to the state in a little over four weeks. Modi had last addressed a rally in Bhubaneswar on February 11.