NASA released several images comparing the lighting in Bhubaneswar and Cuttack, often referred to as twin cities, before and after Cyclone Fani.

Cyclone Fani brought winds of more than 200 kmph when it made landfall in Odisha on May 3. The cyclone left a trail of devastation in large parts of coastal Odisha, with the seaside areas being the worst hit.

In an article shared on its website, the US space agency explains that the images show where the lights went out across some of the worst affected areas in Odisha. “The images show city lighting on April 30 (before the storm) and on May 5, 2019, two days after Fani made landfall. The storm destroyed several transmission towers and uprooted as many as 156,000 utility poles that must re-installed,” the article reads.

NASA also shared the pictures on its Twitter handle.

Six days after Cyclone Fani hit Odisha, the state government has pledged to provide power to Bhubaneswar latest by May 12. However, Puri may not see complete power restoration before a month. The state government has come under severe criticism for the capital’s power woes since last Friday when the cyclone knocked down electric poles.

“About 80 percent of consumers in Bhubaneswar will get power by May 10 and the entire city by May 12, ” a spokesperson of the Information and Public Relations Department said.

Comparing Bhubaneswar’s situation with Puri, he said, “In Bhubaneswar, uprooted trees and branches that have knocked down poles are the issues. In Puri, the problem is more severe as 53 towers and eight grids have been damaged”.

Considering the nature of the damage, Chief Secretary Aditya Padhi had earlier announced that the state will apply for financial assistance from the Centre on ‘cyclone resistant electrical infrastructure’. 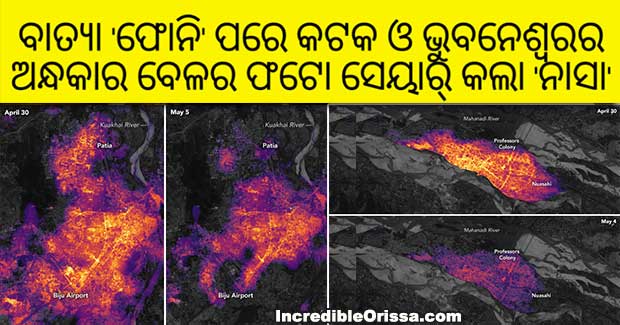