The trailer of ‘Kaun Kitne Paani Mein’ is out!

Set against the backdrop of Odisha, this hindi movie is directed by internationally renowned and critically acclaimed film director Nila Madhab Panda, who is also from Odisha.

Kaun Kitne Paani Mein is a satire based on the scarcity of water faced by villages and there is one such village which is on sale due to the king being poor. He can’t afford the water and thus ends up cracking a conspiracy which goes sour. He needs a saviour and that’s when Kunal comes to the rescue. But does he solve the problem? Can he save the village? Let’s wait for the movie and see for ourselves! 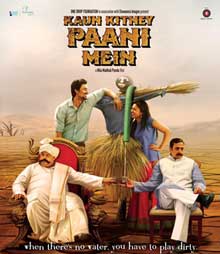 The trailer is nothing extraordinary but it seems like director Nila Madhab Panda is all set to spread a social message through the film.

It should be noted that amidst the ‘Rangabati’ song controversy, director Nila Madhab Panda announces that this film has a very interesting Rangabati dance number.