Eminent filmmaker from Odisha, Nirad Mohapatra, died of cardiac arrest at a private hospital in Mumbai today. He was 67.

The Odisha-born director taught acclaimed directors like Vidhu Vinod Chopra, Saeed Mirza and Ketan Mehta as an FTII lecturer from 1972-1974.

Nirad Mohapatra, an alumni of the Film and Television Institute of India (FTII), Pune, had shot into international fame with his very first film “Maya Miriga” in 1984 which won a Rajat Kamal at the National Film Awards before going on to win a special jury award at the Cannes Film Festival.

Mr Mohapatra was teaching at the Film School of KIIT University, Bhubaneswar as a guest faculty for the last four years. 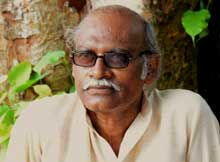 Nirad Mohapatra, best-known for his cultural, ecological and industrial documentaries, will be cremated in Mumbai today.