The administration of Odisha’s Maa Sarala temple has decided not to perform puja of newly purchased motorcycles unless owners of the two-wheelers don’t have helmets with them.

The Maa Sarala temple management, abiding by police instructions, implemented the “no helmet-no puja” policy by refusing the puja rituals to vehicle owners, who had turned up without the safety gear.

It is seen that most of the people bring their new motorcycles to the temple for conducting puja and to seek blessings of Goddess Sarala for a safe ride.

As many as 10 new motorcycles are brought to the temple for puja every day and the number goes up to 50 on the occasion of Sankranti. As per reports, a total of 16,004 new motor vehicles were registered in the district last year which include 13,203 two- wheelers.

Maa Sarala temple is one of the most famous and revered shrines of Odisha. Thousands of devotees from across the State throng the temple which is believed to be more than 1,000 years old, Head priest of the temple Sudam Charan Panda said.

Hailing the decision of the priests, Jagatsinghpur SP JN Pankaj said efforts of the temple administration to bring down road accidents is praiseworthy. 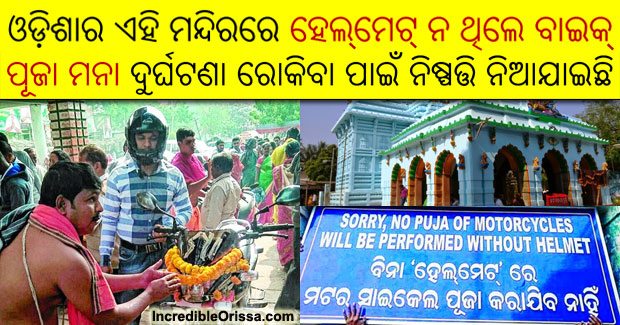 Home > Odia News > No helmet, no puja of new motorcycles at this Odisha temple