These recommendations are made by a Department of Telecommunications committee which released a much-sought-after report on net neutrality yesterday.

The panel has proposed to regulate domestic calls made using Internet-based calling applications such as Skype, Whatsapp and Viber at par with phone call services offered by telecom operators.

The logic given by the committee is that calls made through the internet (through services such as Viber, Skype and WhatsApp), are nearly six times cheaper than those made through a conventional mobile network. Also, it claims that VoIP players enjoy a regulatory arbitrage as they do not have to comply with licencing conditions and fee such as those mandated on telecom operators such as Airtel, Vodafone or Idea Cellular.

In a major dampener for consumers, the report calls for VoIP services to be licenced in the same way as mobile operators are. This could mean that such service providers will eventually have to pay a licence fee, which could force them to start charging customers money for use of their services.

The pricing difference is around 12.5 times in the case of a voice call and 16 times for messages between services offered by telecom operators and OTT players, data put together by the TRAI showed. 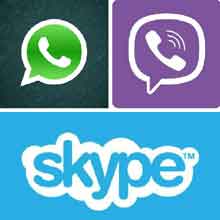 The panel has opposed projects like Facebook’s Internet.org, which allow access to certain websites without mobile data charges, while suggesting that similar plans such as Airtel Zero be allowed with prior clearance from the Telecom Regulatory Authority of India.

For a one-minute phone call, a customer is charged around 50 paise, but a call made using Internet costs 4 paisa to a customer, according to the TRAI calculations.

The committee has invited suggestions and comments beginning Thursday till August 15, 2015.