He is a Jagannath temple Chhamu Khuntia servitor and part-time Oriya film actor, who has acted in Odia movies such as ‘Mo Sunapua’, ‘Jay Jagannath’, ‘Dhauli Express’, ‘Mukhyamantri’, ‘Abhimanyu’ and ‘Luchakali’.

The film will be made in three languages – Hindi, English and Italian. The story travels from the times of the Great Depression during the Second World War in Europe to the present time.

Shambhunath Khuntia will be seen as a dharma guru in the film that dwells a lot on mysticism.

The movie will be shot in Los Angeles, Vienna and Varanasi. Shooting will commence in August, sources said.

When filmmaker Sunil Babbar of Ants fame came to visit the Jagannath temple, he chanced upon Khuntia and asked him to play a role in his upcoming film Melody.

“I was stunned at first and could not reply. When I met him later, he told me about the character and the story of the film. I decided to give it a shot,” says the chhamu khuntia or the bodyguard of the deities. 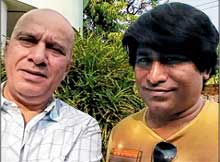 A theatre artiste, Shambhunath Khuntia has acted in over 200 plays. He began his acting career with one of the oldest theatre groups in the state, Annapurna, and gradually took to working in Odia films.

Uttam Singh of ‘Dil To Pagal Hai’ fame and Lanfranconi have composed music for the movie. Its soundtrack was released in Mumbai recently.