In a tragic case, a couple from Odisha ended their lives by jumping from the fourth floor of a building in South Delhi after their seven-year-old son died of dengue at a Delhi hospital.

The family, hailing from Kendrapara in Odisha was living in a rented flat in South Delhi’s Lado Sarai area.

Their only son Avinash, was suffering from dengue since last one week. The couple had tried to get their child treated in MAX, Modi and Molchand hospitals, but due to unavailability of beds his treatment was delayed. On Monday, he was admitted to Batra hospital in a critical condition, but died within four hours of being admitted.

After performing the last rites of their son, the couple jumped to death from the terrace of the four-storey building they were living in.

The couple’s bodies were discovered by a neighbour on the intervening night between Thursday and Friday. The couple had their arms tied together with a stole.

The deceased were identified as Laxmichandra and Babita Rout, both natives of Odisha, said DCP (south) Prem Nath, adding that the couple have left behind a one-page suicide note in Odia, in which they written that “it is nobody’s fault” and the “the decision” was theirs. 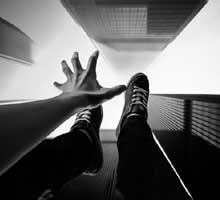 Laxmichandra worked with a private company and the family had been living for more than one year in a two-room rented apartment at Lado Sarai, said a police official.