Another Odia director Chittaranjan Tripathy is ready to debut in Bollywood with his first Hindi film ‘Tera Mera Tedha Medha’.

Tripathy is also the Music Director, co-producer and acting in the movie. The film will release on September 11.

“My first Hindi feature film Tera Mera Tedha Medha is a romantic comedy about a young couple. They are in a live-in relation and they are painters by profession. Their struggle for existence and interpersonal relations are narrated from the perspective of two famous planets of Indian astrology, Shani and Mangal,” Chittaranjan said. 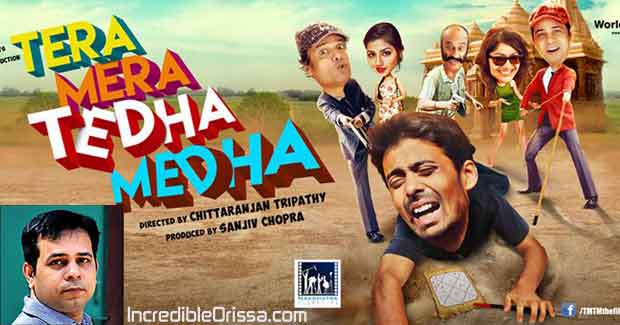 Chittranjan Tripathy is an NSD graduate and a well known name in Delhi’s theatre circle. The play, Tajmahal Ka Tender, directed by him, became a hit and ran in Delhi for 10 years. Not only this, he has composed over 500 songs for drama and films.

Earlier, he has directed two Odia films. His first Odia movie, Dhauli Express bagged many awards and was showcased in the film festival celebrating 75 years of Oriya cinema, organised by the ministry of information and broadcasting. Then he made another film, named Mukhya Mantri, which didn’t do very good in box office.

Then he returned to Mumbai and directed some TV serials like Jaaney Pehchaney Se Ajnabee, Mano Ya Na Mano, Yeh Ishq Haaye, Dhoond Legi Manzil Humein and some episodes of Savdhan India.

With the film scheduled to release on September 11, he shares that it was a good experience to work with actors like Rahul Bagga, Rajesh Sharma, Neeraj Sood and Geetika Tyagi among others.