Odia girl Neha Swain is one of the two Indians who have won the Queen’s Young Leaders award in the UK for their exceptional work in transforming the lives of others.

Neha, a youth facilitator and co-founder of NGO Rubaroo provides an inclusive space for young people, irrespective of their socio-economic background, to develop their leadership skills through interactive workshops.

Her team provides workshops to schools in India free of charge and has so far worked with nearly 2,000 young people in the city of Hyderabad. “Once again 60 incredible young people from around the Commonwealth have shown strength, leadership, empathy and drive. Some of our winners are just embarking on their leadership journey and others are more established. Either way, we recognise not only what these amazing young people have achieved, but also their potential in changing people’s lives for the better in the countries and communities in which they live,” said Astrid Bonfield, chief executive of the Queen Elizabeth Diamond Jubilee Trust.

Neha was also happy to be appreciated by the Queen. “I was overwhelmed to get the award. Queen Elizabeth spoke to each and everyone while giving the award. She asked me about the kind of work I was doing, so I got a chance to speak about Rubaroo and she appreciated the organisation,” she says adding, “It was overwhelming for us to see all the superstars at the same time — The Queen, Prince Harry, David Beckham, Kumar Sangakkara and High Commissioners from many countries, among others. It was amazing that everyone had read up about us before the meeting. Before we could introduce ourselves, they would say that they knew us. So that was overwhelming.”

Elaborating on Rubaroo, Neha says, “My co-founder Monisha Vemavarapu and I started Rubaroo in July, 2013. We also have a third co-founder, Hema Khatri. Our main purpose is to create inclusive spaces. We primarily work with young people, and people who influence young people, for example, parents, teachers, etc.”

Adds Monisha, “We create learning spaces — they can be workshops, exposures, three-hour long campaigns — where people go into a community and understand the community better. In the last three years, we have worked with around 3,000 people, from children in the Old City to schools in Hitec City, with a host of teachers and also youngsters from various colleges.” 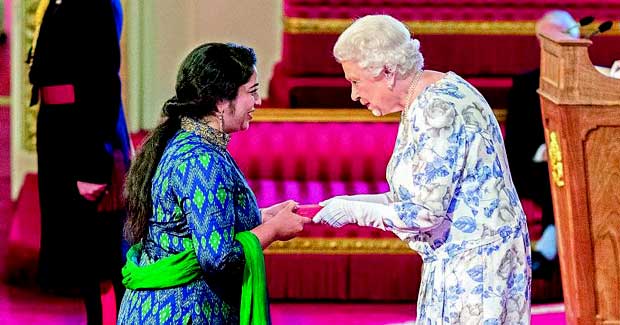