A 6-year-old Odia girl Aarushi Adhikari solved 24 Rubik’s Cubes (3X3X3) in 1 hour and entered into India Book of Records as the youngest in India and the World.

She can also solve this as blindfolded. Watch in the below video here. 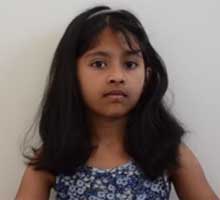 India Book of Records is a registrar of national and international world records in India.

More number of record attempts are made in India than in any other country of the world. Every 10th world record belongs to an Indian.