Union Minister Dharmendra Pradhan met all six Odia girls of BSF, who would display Daredevils act during the Republic Day Parade in New Delhi on January 26.

In a first of its kind, 113 women from the Border Security Force (BSF) will make history by showcasing adventurous motorcycle activities during Republic Day event at Rajpath in New Delhi.

Dharmendra met Mita, Anusuya, Sukamini, Krishna, Subanti and Banita at his official residence and wished them good luck for the upcoming adventure. He also hailed these girls for putting all their efforts to safeguard the nation on border.

An Odia girl Mita Hansda is the part of the historical 27-member all women daredevil bikers contingent which will make its debut at Rajpath on January 26 this year. These women would showcase their stunts and acrobatics on their 350cc Royal Enfield Bullet motorcycles.

Mita Hansda hailing from Dhenkanal district is elated to be in the team and is sweating hard ahead of her debut on this Republic Day.

Odisha CM Naveen Patnaik showed his delight by a tweet figuring her as an embodiment of our women power & their capabilities in every field. Union Petroleum Minister Dharmendra Pradhan conveyed his best wishes to this young Odia girl who made it to the daredevil team.

The BSF women will perform 16 stunts on the bikes in the parade. In 2015, women contingents of the Army, Navy and Air Force had made their debut in the national parade. 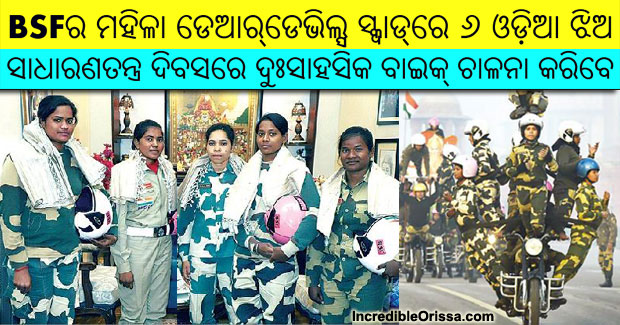