The last rites of Hemant Panda, the martyred Odia jawan of Khurda district, were performed at his native village Atharanga under Begunia police limits with full state honour today.

As per reports, Panda was martyred in a terrorist attack in Baramulla district of Jammu and Kashmir on January 26 and his body was brought in a flight from New Delhi to Bhubaneswar and was later taken to his village last night.

Earlier, a funeral procession was taken out in the village during which bereaved family members, relatives and villagers paid their last respect. He had joined the Indian Army in 2017 and was posted in the Baramulla sector.

“We are deeply saddened and proud at the same time that he laid his life for the country. He was very popular in our village and everybody loved him,” said a villager. 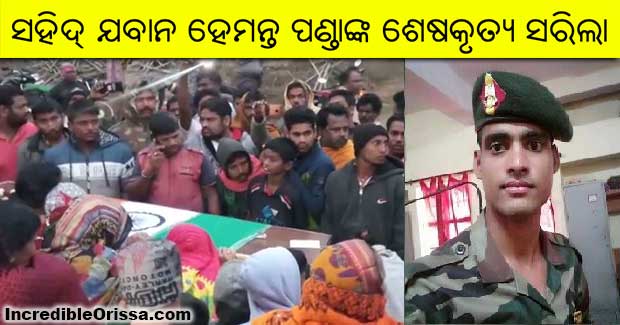