Odisha Chief Minister Naveen Patnaik on Thursday objected the Centre’s decision over non-inscription of Odia script on the kilometer stones and information boards on the national highway (NH) inside Odisha.

In a letter to Union road transport and highways minister Nitin Gadkari, CM said it is a matter of grave concern that the local language (Odia) has mostly been ignored in place identification/destination boards and kilometer stones throughout the state.

Worth mentioning, there had been outrage over the issue owing which people have vented out their agony on social media platforms. Twitterati had been recently tweeting to register their protest with #StopHindiChauvinism and #stopHindiImposition and urging for corrective measures.

“According to your ministry’s circular of 24th December 2004, all information boards should invariably be inscribed in three scripts, namely, local, Devnagri and Roman scripts and local language should be used in every kilometer stone in isolation,” Naveen wrote in the letter.

He said the dimensions of letters and numerals to be inscribed on the kilometer stones have also been clearly spelt out in the circular. “But I am deeply anguished to find that the aforesaid instructions are not being followed in our state,” Naveen said.

The chief minister also said that there is a perceptible lack of destination and place identification boards inscribed in Odia script on the NH causing much inconvenience to the public at large. 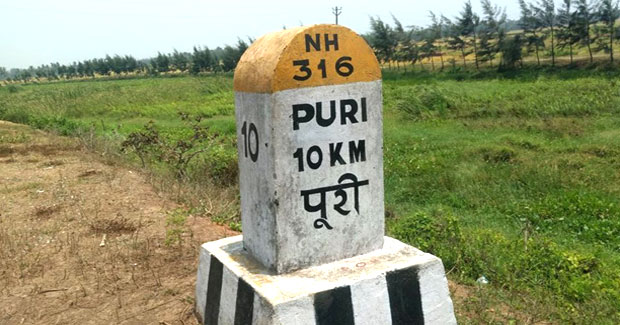