He set the record by scaling 19,341 ft mountain just in six days. Even though Satyaprakash is an engineer by profession, his passion for trekking has put him on the top of mountaineering expedition.

He received a certificate from the Kilimanjaro National Park and Tanzania National Park managements for achieving the feat. He decided to scale the Mount Kilimanjaro in February 2017. For the mission, he had made a 21-km long marathon practice. He reached South Africa from America on November 10 and started the trekking on November 13.

On the first day, Satyaprakash started climbing from the Machame Gate and crossed 3,000 meter in about six hours. Finally, he reached the top on the fourth day despite severe headache due to lack of oxygen.

Satyaprakash, who hails from Jagatsinghpur district in Odisha, is settled in Oregon in the United States. With his keen interest in trekking and long journey, he had joined basic climbing education programme at the Portland Mazamas Club in 2014 where he had learnt the tricks to cross hurdles and to climb mountains. 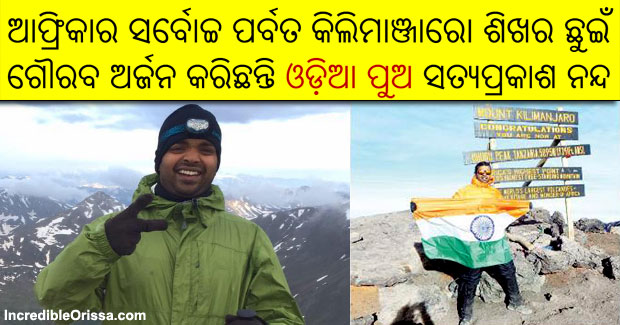