Four Odia players have been selected to the 20-member Indian Junior Women’s Hockey Team for the upcoming matches against France. They are – Mariana Kujur, Ajmina Kujur, Philicia Toppo and Jiwan Kishori Toppo.

Hockey India (HI) on Wednesday named the Indian Junior Women’s Team, led by defender Salima Tete, for the upcoming matches against France to be held from February 8 to 13 in Lucknow and Gorakhpur.

The team will play a total of four matches against the French national team, the first two of which take place on February 8 and 9 at the Padma Shri Mohammad Shahid Synthetic Hockey Stadium in Lucknow, while the third match is scheduled to be held on February 11 at the Veer Bahadur Singh Sports College, Gorakhpur.

The teams return to Lucknow for the fourth and final match to be played on February 13.

ALSO READ: Odisha may waive road tax and other fees on electric vehicles 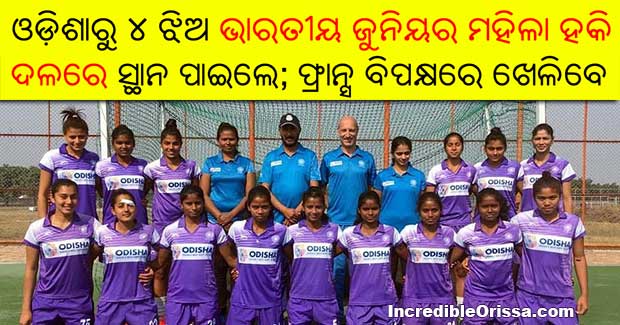