Do you know that two odia players, Dipsan Tirkey and Anand Lakra are part of the Junior Asia Cup winner Indian Hockey team?

The team reached New Delhi on Monday night and Hockey India officials and fans received the players at the airport with the beating of the drums and with garlands.

Hockey India announced a cash prize of Rs one lakh each for the players and the head coach of the Junior Men’s Asia Cup-winning team. Besides, HI also announced Rs 50,000 for the other support staff of the team.

India had begun the campaign on a winning note by defeating Japan 2-1, followed by a close match with host Malaysia 5-4 and a 4-1 defeat of 4-1. India drubbed Oman 9-0 in the quarterfinals and then beat Japan 6-1 in the semi-finals. In the summit clash, India beat arch-rivals Pakistan 6-2 to lift the trophy. 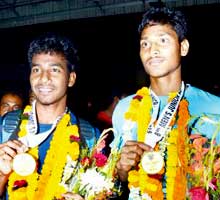 Dipsan Tirkey and Anand Lakra reached Rourkela on Tuesday. Fans received both players at the railway station with garlands.