In a revolutionary breakthrough in the field of gravitational deflection, a group of astronomers led by Odia scientist Kailash Chandra Sahu has successfully validated Albert Einstein’s general theory of relativity by measuring mass of an isolate object in the galaxy.

Kailash Chandra Sahu at the Space Telescope Science Institute and his collaborators have used the Hubble Space Telescope and calculated that the mass of a nearby white dwarf star is about 68 per cent of the Sun’s.

Sahu and his team applied the concept to a white dwarf Stein 2051 B which crossed close in front of a more distant normal star. They measured the tiny shifts in the apparent position of the background star through astrometric micro-lensing with the help of HST. The apparent motion matched the prediction of general relativity and it helped them determine the mass of the white dwarf. A native of nondescript coastal village Bellagam in Ganjam district, Sahu (57), fondly known as planet hunter, was a gold medalist in Physics from Berhampur University in 1977.

He did his PhD in Astronomy from Gujarat University in 1985 and researched at Institute of Astrophysics in Paris and Spain before joining STSI in 1995. The noted scientist was the youngest among his five brothers.

One of Sahu’s favourite works was to search for exo-planets in the galactic bulge through a large HST programme Sagittarius Window Eclipsing Extrasolar Planet Search (SWEEPS). The programme involved monitoring of about 300,000 stars towards the galactic bulge using an advanced camera system on board HST, to search for transiting extra-solar planets. This led to the discovery of 16 planets, including five ultra-short-period planets in 2006. 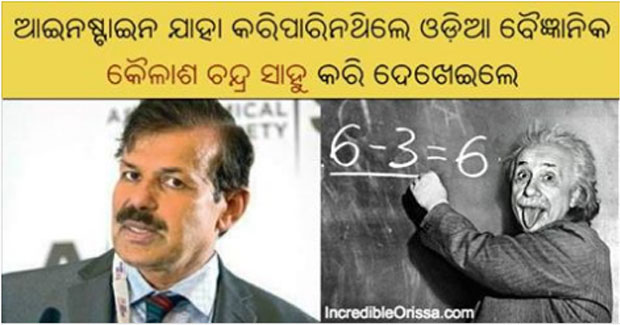