Fusion for Love is a unique cover song and composed by Sagar himself. It is unique because it is fusion of two famous Bollywood songs ‘Jeena Jeena’ and ‘Main Tenu Samjhawa Ki’. Sagar has also acted in this video with her co-artist Kanika Sanduja.

Kanika Sanduja is basically an IT professional and a good dancer, she has acted for first time in her debut music video.

This music video is filmed and directed by Dilshad Ayubi under InCrena Productions who is famous for his short films “Sanjeeda” and the latest release “French Cut”.

Shot totally in Bhubaneswar with two venue partners “Brewbakes” and “Actors Studio” and it took 3 days to complete the whole shoot. 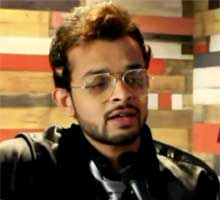 Sagar Tripathy started singing from very childhood only but entered the professional industry in 2009. He is learning classical vocal under Ashamukul Barik in Bhubaneswar and before this he got trained Western vocal in Mumbai under ABYSS. His fame and fan following is quite evident from his more than 700 shows performed all over India for famous brands like ICICI, HDFC, AIRTEL, AIRCEL, VODAFONE, SBI, HAVVELS, ACC, ULTRATECH, KONARK, PARIWARE, KURL-ON, LAYEERS, MARUTI SUZUKI, VOLKSWAGEN, TATA MOTERS, HUYNDDI, and many National colleges all over India, specially in Odisha. In 2013, he won the title of MBC ANTAKSHARI (a singing reality show).