Odisha remembers 13 Odia soldiers who sacrificed their lives in the Kargil war that took place between India and Pakistan during May-July, 1999.

Here is the list of Martyrs of Kargil war from Odisha.

On Kargil Vijay Diwas, Chiefs of Defence forces, political leaders and people from across the country paid respect to Indian soldiers who fought the Kargil war to win back Indian territory.

It should be noted that on 26 July 1999, at the end of a 73-day conflict, the Indian armed forces sent back the Pakistani invaders from Kargil, Drass, Tololing, Batalik and Turtok sectors in Kashmir to the other side of the Line of Control.

Atal Bihari Vajpayee-led NDA government was in power at the time of this war. Built by the Indian army, the Kargil War memorial wall in Dras has inscriptions of all the Indian soldiers who lost their lives in the war. The Memorial also has a museum with documents, recordings and pictures of the Indian soldiers at Kargil.

Victory in the Kargil war came at a heavy price with 527 soldiers killed and over 1700 injured. Among those killed 20 were officers, 23 were Junior Commissioned Officers (JCOs) and 475 were Jawans. Of the 1700 injured 66 were Officers, 60 were JCOs and 60 were Jawans. 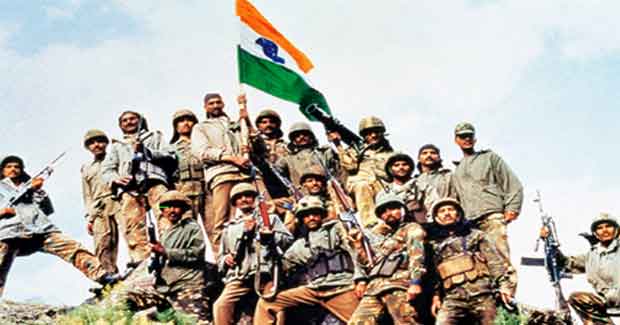