National Award-winning Sound Designer Nihar Ranjan Samal said: “Bajirao Mastani is so far my best cinematic experience. Working with a director like SLB (Sanjay Leela Bhansali) is at once challenging and fulfilling. I am now very happy seeing the audience appreciating the movie as we had put a lot of hard work in making the film.” 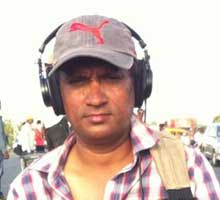 It is worth mentioning here that Samal, who hails from Jajpur district of Odisha, had studied in the prestigious Film and Television Institute of India (FTII) in Pune before landing in the City of Dreams to make a mark in the Hindi film industry.

After his post graduate film had bagged a National Award, the techie got motivated to do more and more meaningful movies. The acclaimed sound designer says he loves to be associated with good projects, especially a good script and a strong team.