The Odisha Government has decided to establish Odia University at Satyabadi in Puri district. A decision in this regard was taken at the first meeting of the Heritage Cabinet held under the chairmanship of Chief Minister Naveen Patnaik at the State Secretariat.

“The place – Satyabadi has a significant position in Odisha history. It is the land of famous Panchasakha (five comrades). The Satyabadi Bana Vidyalaya, established by them, had played an important role in Indian freedom struggle. In honour of the Panchasakha, it was decided in the heritage cabinet to set up the Odia University at Satyabadi,” said chief secretary Aditya Prasad Padhi after the meeting.

The state will provide 25 acres to set up the varsity, he said. Approval was also given to the formulation of an Odia Culture and Heritage Policy to facilitate preservation and proliferation of the state’s art, culture and classical Odia language.

The proposed Odia University would offer post graduate courses in Odia language and literature. It would also facilitate research activities on literary criticism, evolution of east Indian language scripts, historical scripts, archaeology and translation into and from Odia.

The heritage cabinet was formed with an aim to propagate and preserve the rich heritage, culture of Odisha and enrich Odia language. The decision in this regard was taken at a special cabinet meeting in Puri on December 26, last year. 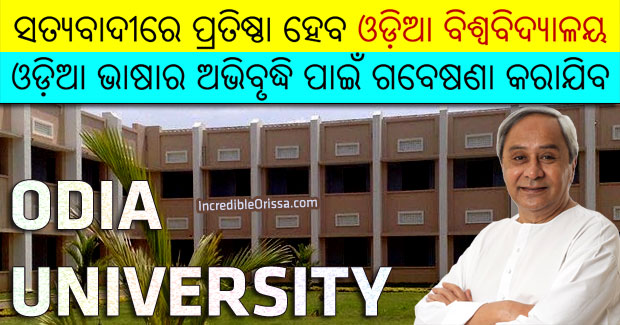