While people of Odisha celebrated Odisha Day on April 1 followed by Odia New Year on Saturday, the non residential Odias celebrated the same with much pomp and galore at Dubai, UAE. Odias have made a home away from home in Dubai.

The audience in the United Arab Emirates (UAE) were mesmerised witnessing the tremendous performance by eminent artists showcasing Odia culture during celebrations of Utkala Dibasa and 10th edition of Aekalavya in Dubai.

The Odisha Samaj United Arab Emirates (OSUAE), the largest association of Non Resident Odias in the Middle East and North Africa (MENA) Region in association with The Consulate General of India, Dubai and Lasyakala organised Utsav 2018 – Utkal Divas (Odisha Day) Celebrations & the 10th edition of Aekalavya (A Tribute to Guru Shishya Parampara) on the 13th of April (Friday), 2018 at Global Indian International School, Al Barsha, Dubai. A record crowed of over 500 people were a part of the celebrations.

The event started with the lighting of the lamp offering prayer to Lord Jagannath. It was followed by a performance on the iconic Odia patriotic poem written by Kanta kabi Laxmikanta Mohapatra – ‘Bande Utkala Janani’.

A splendid display of the best that Odisha has to offer in terms of dance, music, handicrafts, fashion & food was showcased in the daylong event which had two parts. The morning session comprised of performances by the hugely talented local Odia children, men and women. They have been practicing for months and the final display was spellbinding. The highlights of the morning session were performances of Odia children to the tunes of popular Odia songs. A tribute to legendary Odia Bhajan Singer – ArabindaMuduli was also very emotional. Also captivating was a tribute to the Bollywood’s first Female Superstar Sridevi, who recently passed away in Dubai.

A souvenir brought out on this occasion was released by the Guests and other eminent personalities. The souvenir contains many interesting articles written by members of the Odia community of the UAE about Odisha and its personalities. 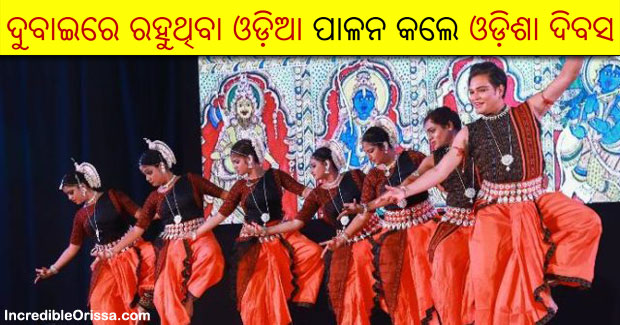