As the national-level athletic meet, 19th Federation Cup (FC) came to the end of the second day, there was something to cheer as Odisha bagged two gold and one silver medal.

In the men’s 100-metre sprint, Amiya Mallick struck gold with a timing of 10.56 secs. The qualifying timing for the men’s 100-meter event set by the Athletics Federation of India (AFI) was 10.37 secs.

Odisha bagged both the gold and the silver in the women’s 100-meter sprint Srabani Nanda outpacing Dutee Chand (11.86 secs) for the gold with a timing of 11.59 secs. The qualifying timing set for event by AFI was 11.67 secs.

As much as 1040 athletes representing 36 teams are taking part in the four-day meet. 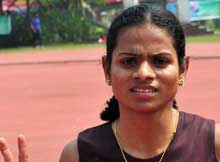 The Federation Cup, dubbed as a selection trials for the Indian aspirants looking to take part in the Asian Athletics Championships at Wuhan (China), will see them trying to earn their berths at Mangala Stadium in Mangalore, Karnataka.