The Odisha government banned sale of Maggi noodles in the state with immediate effect.

Samples collected from different parts of the State had been sent to the State Public Health Laboratory for testing, which confirmed presence of the banned MSG.

“We have accordingly instructed all Collectors to enforce the ban immediately. The reports on lead content in Maggi samples sent to the Central Food Laboratory, Pune, though, are still awaited”, Health and Family Welfare Minister Atanu Sabysachi Nayak said.

Curiously, the state government’s action comes two days after Nestle, the company that produces Maggi noodles, ordered the recall of the product from the Indian market. 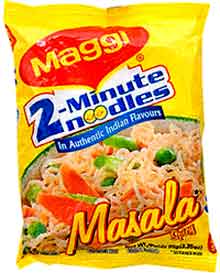 As per the norms set by the Food Safety and Standards Authority of India (FSSAI), the presence of MSG in any food product is highly detrimental to the health, the minister said.

25 Maggi noodles samples from 14 districts were sent to Pune after questions were raised on the instant food’s contents.

“We will be conducting tests on all other brands of noodles and pasta that are being sold in the markets in Odisha,” Nayak said.