After the BJP’s poll debacles in Madhya Pradesh, Rajasthan and Chhattisgarh, the party’s Odisha unit on Tuesday promised to waive farm loans in the state if they come to power in the 2019 Assembly elections.

The announcement was made by BJP state president Basant Panda at a press conference in Bhubaneswar. Assembly elections in Odisha are due in 2019 along with the Lok Sabha elections.

Besides, Panda informed that the party would begin a ‘Mandi Chala Abhiyan’ across the State from Wednesday till January 7 to protest against faulty functioning of Mandis and delay in paddy procurement.

During the Abhiyan, the party members would stage demonstrations and burn effigies of Food Supplies and Cooperation Minister Surjya Narayan Patro in front of all the 4,381 Mandis across the State.

Panda further announced that his party would also gherao the State Secretariat on January 8 to press for their demand of farm loan waiver.

The ruling Biju Janata Dal in Odisha had already given a call for gherao of Parliament in Delhi on January 8 demanding proper minimum support price (MSP) on paddy. 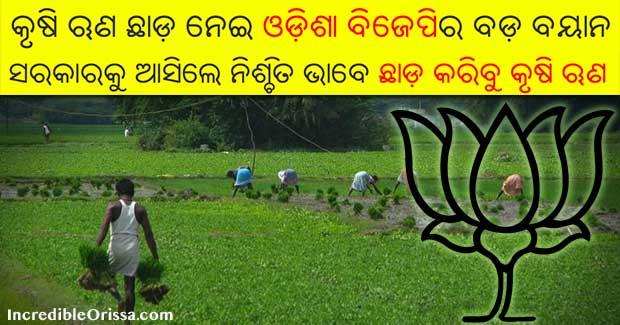