Ojha, who represented India in 24 Tests, 18 ODIs and 6 T20Is, said it was time to move on in his next phase of life. The 33-year-old last played for India in 2013 during Sachin Tendulkar’s farewell Test against the West Indies in Mumbai.

It’s time I move on to the next phase of my life. The love and support of each and every individual will always remain with me and motivate me all the time 🙏🏼 pic.twitter.com/WoK0WfnCR7

Quite ironically, his last appearance for India saw him come up with a man of the match performance as he picked up ten wickets in total in India’s innings win over West Indies. Ojha finishes his Test career with 113 wickets in 24 Tests.

Pragyan Ojha took to Twitter to announce his decision to retire from international and first-class cricket. “It’s time I move on to the next phase of my life. The love and support of each and every individual will always remain with me and motivate me all the time,” tweeted Ojha.

Ojha achieved World no. 5 as his career-best ranking in ICC Player Rankings and will be remembered as the first and one of the two spinners to ever win the Purple Cap in the Indian Premier League.

In December 2014 Ojha was barred from bowling in competitive cricket after his action was found to be illegal. Later on 30 January 2015 Ojha cleared the test and was allowed to resume his bowling. Ojha played his first One Day International match against Bangladesh on 28 June 2008 in Karachi and ended up with figures of 2/43.

READ: Technical students in Odisha to get training on Artificial Intelligence 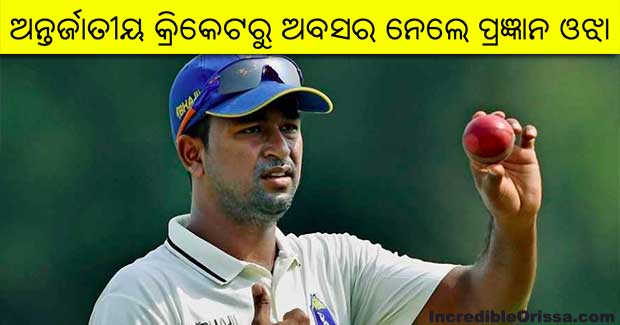