Roshan Kumar Rana from Kalahandi district of Odisha has been awarded by Prime Minister Narendra Modi as the winner in a painting competition held under Swachh Bharat Diwas function in New Delhi.

His tiny hands could barely hold the brush and easel with ease but he was firm on giving shape to his dream of a clean India. Hardly 10 years old, Roshan Rana painted his dream of Swacchha Bharat in myriad hues and drew the attention of none other than the crusader of the campaign Prime Minister Narendra Modi.

Roshan received the award along with Rs 1 lakh cash prize and other gifts from PM Modi. He became the first to have been awarded in the junior category in national level drawing competition.

Roshan, the child artist and a class V student of Bhangawari Upper Primary School under Sadar block in Kalahandi district, secured the first position making a beautiful painting on ‘My Dream of Swachh Bharat theme’.

The function which was held at Vigyan Bhawan also had others competition on Swachh Bharat under various categories including essay, painting and film. 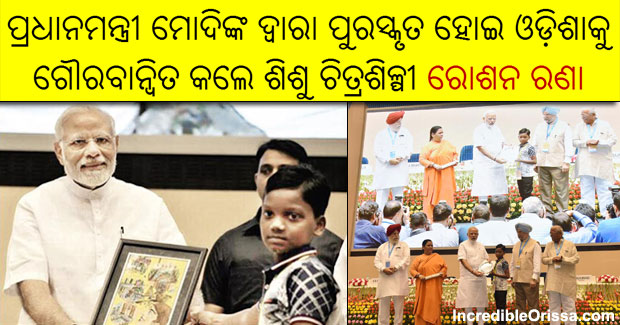