Sarbajeet Mohanty from Bhubaneswar, Odisha is India’s only and the world’s youngest certified demonologist who is a part of the Indian Paranormal Team (IPT) that offers solutions to people experiencing paranormal activities around them.

The team consists of 18 members based in various places across the country. Akshai Sthalekar and Sarbajeet Mohanty formed the Indian Paranormal Team in 2013 and now have a team of 10 members, as well as a research panel of 8.

Akshai Sthalekar is a certified paranormal investigator and a well-known spiritual healer. “We used spirituality as a base and mixed it with scientifically produced results for the paranormal community,” Sthalekar and Mohanty said.

The world of ghosts and spirits evokes a sense of fear in most people. But unfolding the mysteries of the paranormal world is the ultimate passion for 19-year-old Sarbajeet Mohanty.

“Initially, we helped people with quick solutions to their paranormal problems on the Internet. Gradually, more people came to know about us, and we began taking up cases. We started visiting spots for investigation and providing solutions right away,” Sarbajeet said.

Four investigators, who are based in places such as Sundargarh, Jharsuguda and Cuttack, assist Sarbajeet, who, along with his team, has already handled over 10 cases in the state.

“A number of people residing in the urban areas have also contacted us. Their problems range from hearing eerie sounds at night to witnessing shadows passing by,” Sarbajeet said.

Combining a number of scientific methods and spiritual healing, Sarbajeet and his team try to unfurl the ambiguities of the world surrounding spirits and negative energies.

The scientific devices used by the team during ghost-hunting include electromagnetic field detectors, electronic voice phenomenon (EVP) recorders, ecovox (a mobile application for abnormal sound detection) and motion censors. All of these devises are brought from foreign countries. 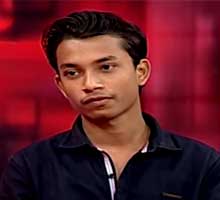 “The paranormal is still a taboo in India. When we say we investigate the paranormal, people think we are occult magicians,” these real-life ghostbusters said.

“We face criticism, warnings etc. The common man of India, however, when in need, will surely contact us as we are one of the most reputed teams in India. Also, having a spiritual base to our investigations and house cleansing along with the regular scientific approach, people connect to us very well,” Sarbajeet concluded.