The Naveen Patnaik government tried to thwart the BJP-led NDA government’s bid to appropriate the legacy of Buxi Jagabandhu and other icons of the state. Naveen appears to make political capital out of the state’s pantheon of local heroes and is determined to prevent their “poaching”.

Finance minister Pradip Amat announced the launch of Buxi Jagabandhu Assured Water Supply to Habitations (BASUDHA) scheme as a tribute to Jagabandhu, the leader of the Paika rebellion, an armed uprising against the British, which is being commemorated in its bicentennial year.

The government also announced the launch of a programme in the name of freedom fighters Malati Devi and Gangadhar Meher. While Malatidevi Prak Vidayalaya Paridhan Yojana would aim to provide uniforms to children in pre-schools, the Ganagadhar Meher Siskhya Manakbrudhi Yojana would provide free school bags and educational kits. Meher has been one of the most iconic heroes of western Odisha.

The Rs 1,06,911-crore budget for 2017-18 presented in the Assembly by the Finance Minister has several new schemes and many old programmes packaged in a new format. Stating that the Government is facing several development challenges, Amat said the budget will be financed through estimated revenue receipts of Rs 88,932 crore, recovery of loans and advances of Rs 130 crore and borrowing and other receipts of Rs 17,849 crore. The borrowing includes Rs 10,273 crore from the open market.

The Finance Minister announced a new programme – ABADHA (Augmentation of Basic Amenities and Development of Heritage and Architecture) – for holistic development and transformation of Puri to a world class heritage city. He provided Rs 100 crore for the new programme.

Besides, Rs 250 crore has been provided for operation and maintenance of large water supply systems. Provision of Rs 1000 crore and Rs 188 crore has also been announced for the rural and urban components of the Swachh Bharat Mission respectively.

Stating that shelter security for more than 15 lakh households of rural Odisha is a major commitment of the State Government, Amat provided Rs 3100 crore for the programme through convergence of Pradhan Mantri Awas Yojana (PMAY)-Gramin and Biju Pucca Ghar Yojana.

Besides, Rs 200 crore has been provided for construction of 20,000 dwelling units under beneficiary led construction and 30,000 units under affordable housing and slum development components under Odisha Urban Housing Mission (AWAAS).

A provision of Rs 378 crore has been made for maternity benefit programme – Mamata, in the sharing ratio of 60:40 between the Centre and the State. The Finance Minister announced provision of Rs 34 crore for providing uniform for children undergoing pre-school education under the Malatidevi Prak Vidyalaya Paridhan Yojana. Another new scheme, Mukhyamantri Mahila Sashaktikaran Yojana was also announced and provision of Rs 70 crore made for it.

The Finance Minister announced provision of Rs 11,965 crore under tribal sub-component and Rs 8116 crore for SC sub-component totalling allotment of Rs 20,081 crore for these two sections of population.

A provision of Rs 977 crore was made for the National Social Assistance Programme for Old Age, Widow and Disability Pensions and other benefits which is being implemented on cost sharing basis with the Centre. Besides, Rs 840 crore was also provided for Madhubabu Pension Yojana for giving pension to additional beneficiaries.

Stating that the State Government has decided to continue supply of foodgrains (rice/wjeat) at a subsidised rate of Rs 1 per kg to each priority household beneficiary and SC/ST hostel boarders, Amat announced a provision of Rs 880 crore for implementation of National Food Security Act (NFSA) in the State.

Stating that the Odisha Government is committed to provide electricity to all in next two years, Amat said Odisha Distribution System Strengthening Programme (ODSSP) has been started. Under the programme, 500 new 33X11 substations will be added by 2018. A provision of Rs 511 crore has been made for this.

Besides, Rs 160 crore was provided for development of railway projects such as Khurda-Balangir link, Nabarangpur-Jeypore-Malkangiri link and modernisation of Bhubaneswar railway station. To enhance air connectivity, Rs 40 crore has been provided for construction of air strips.

Amat said Rs 4682 has been provided for internal security and administration of justice which included Rs 300 crore for construction of buildings for courts, police, fire services and jails as well as equipment.

The Finance Minister said in order to provide a platform for promotion of art and artists, Kalamandal will be set up on a six acre land at Bhubaneswar. He said Rs 10 crore has been placed with IDCO for construction of Kalamandal.

Amat announced launching of the Mukhya Mantri Swasthya Seva Mission for which Rs 345 crore was provided. Besides, Rs 400 crore was provided for establishment of new medical colleges. He said Rs 185 crore has been provided under the Gangadhar Meher Sikhya Manakbrudhi Yojana (GMSMY) to provide free school bags and education kit to all children from Class I to V, free school uniform to all children from Class I to VIII and free bicycles to all students of Class IX of Government and Government aided schools, Sanskrit tols and Madrasas.

A new feature on administrative expenditure was introduced in the budget estimated at Rs 47,465 crore including provision of Rs 22,000 crore for salary, Rs 11,313 crore for pension, Rs 5,000 crore for interest payment and Rs 5177 crore for maintenance of capital assets. 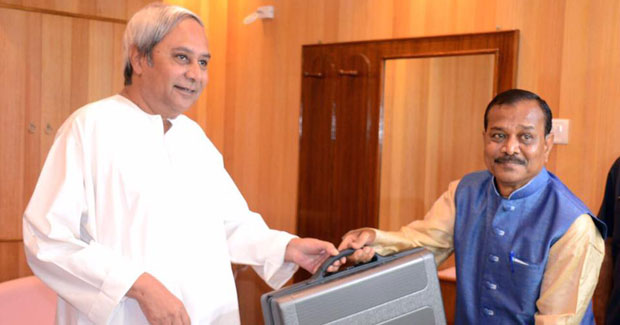