The Odisha government has decided to install closed-circuit television cameras (CCTV) and global positioning system (GPS) devices in all private and government buses.

An official said the step had been taken to ensure safety of passengers, especially women. At present, around 15,000 private and 426 government buses ply in the state.

The Department of Commerce and Transport has issued a notification in this regard and sought public opinion over it.

The notification also directed bus owners to forward the name of drivers, conductors and helpers along with their address, photographs, identity proof and a copy of any police report about their antecedents and character to the state transport authority and regional transport office in advance. 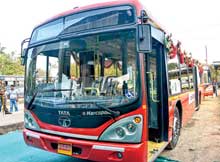 “The passenger buses must have CCTV and GPS facilities in order to get permit for operation in the state,” Commerce and Transport Minister Ramesh Chandra Majhi said.

The Odisha Private Bus Owners’ Association, however, described the move as unrealistic.