Odisha chief minister Naveen Patnaik felicitated young doctor Omkar Hota from Malkangiri district, who earned kudos for carrying a pregnant woman from an inaccessible village to a hospital on a cot.

In an exemplary gesture, Hota had on October 31 walked 8km from Malkangiri’s Sarigeta village carrying a pregnant woman who had just delivered a baby and was bleeding profusely. With death staring at his patient, Hota did not think twice. He literally shouldered the responsibility of taking the patient, Subham Marse to the hospital. Helped by Marse’s husband, the doctor carried her on his shoulder and provided him treatment that saved her life.

Sources said the doctor put the woman on a cot and, helped by her husband, walked for almost three hours through the difficult Chitrakonda terrain to the nearest public health centre at Papulur. After 18-odd hours of treatment and monitoring, the woman and her newborn were declared out of danger.

Chief minister Naveen Patnaik honoured Hota for his commitment to walking the extra mile to take the health-care facility to a remote village, which is 150km away from Malkangiri town. The district’s headquarters town is over 600km from the state capital.

“I am sure there are many doctors, paramedical staff, individuals and organisations in various corners of Odisha running the extra mile to provide selfless health care,” he said. Utkalmani Gopabandhu Das is the symbol of such sacrifice and selfless services in the state, he said. 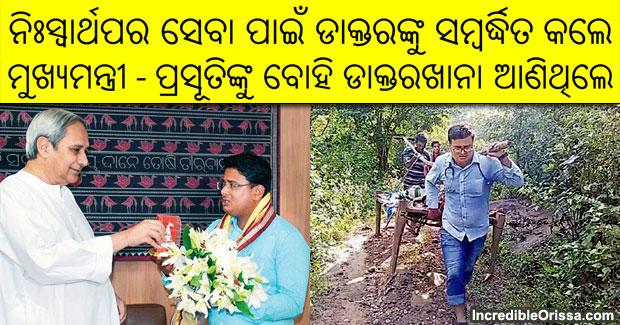