After a long wait of 15 years, Odisha cricket team is all set to play in the quarter-final of Ranji Trophy.

Saurashtra completed a remarkable turnaround as they sent Delhi crashing out of the 2016-17 Ranji Trophy in Vadodara. They won by five runs to record their second win of the season.

That meant Odisha will join Karnataka and Jharkhand as the third qualifier from Group B irrespective of the result in their final group fixture against Jharkhand in Thiruvananthapuram from December 15. This will be Odisha’s first Ranji Trophy quarter-final appearance since 2000-01.

Odisha, who already has a match in hand thanks to the postponement of its last league match in Dindigul following death of Tamil Nadu chief minister Jayalalitha, is on a comfortable 22 points and third place in group B behind Jharkhand and Karnataka.

This came after both its immediate rivals Maharashtra and Delhi lost their respective do or die matches in group B. Maharastra who had 21 points earlier lost its last match by 10 wickets against Karnataka while Delhi went down to Saurastra by just 4 runs in its last league encounter thus making Odisha’s last match against table toppers Jharkhand scheduled to be held in Trivandrum a matter of formality.

Meanwhile, statistics said Odisha is very much likely to face Gujarat in its quarter round match as Govinda Poddar led squad will leave for Trivendram on December 12 hoping to win or take first innings lead against its opponent to boost morale before knock outs.

Mumbai, Gujarat and Tamil Nadu from Group-A and Hyderabad and Haryana from group-C have also entered the quarters. 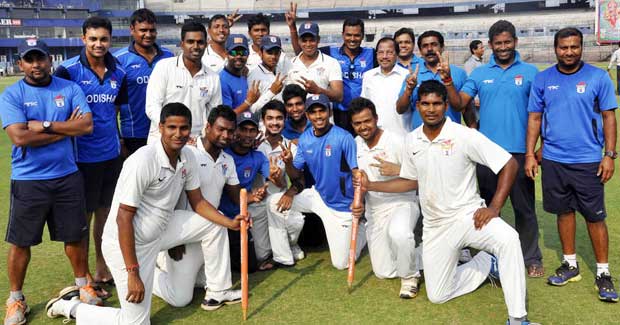