As many as 17 districts of Odisha will be covered under city gas distribution (CGD) network for supply of cooking gas through pipe with an investment of Rs. 3,424 crores.

The project to be implemented over a period of eight years will generate employment for around 19,800 people. In the 9th CGD bidding round for 86 new geographical areas (GAs) covering 174 districts across the country, seven GAs of the State were selected.

The areas selected in Odisha include Jagatsinghpur, Kendrapara, Jajpur, Keonjhar, Angul, Dhenkanal, Bargarh, Deogarh and Sambalpur districts which have been awarded to Bharat Gas Resources Limited with an approximate project cost of Rs. 1252 crore, said Harneet Singh of the company.

Adani Gas Limited has bagged the award for Balasore, Bhadrak and Mayurbhanj districts for 20 CNG stations and 1,50,464 domestic connections over a span of eight years with a total investment of Rs 500 crore.

Chief General Manager of GAIL Gas Limited R Chowdhury said the company has been authorised to operate in Sundargarh, Jharsuguda, Ganjam, Nayagarh and Puri districts. Sundargarh and Jharsuguda will have 20 CNG stations and approximately 1,00,000 households will be connected with PNG with an investment of Rs. 944 crore. For Ganjam, Nayagarh and Puri, the investment is Rs. 728 crore.

These districts will have 15 CNG stations and approximately 51,000 households connected with natural gas. A CGD is an interconnected network of pipelines for supply of gas to domestic, industrial or commercial premises and CNG stations situated in a specified geographical area. 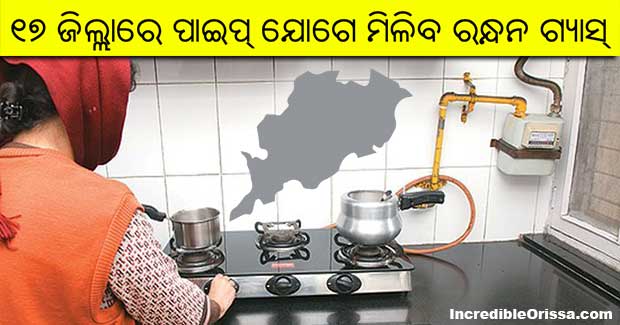 Home > Odia News > Odisha: 17 districts to get cooking gas through pipe in 2 to 3 years