Defying all physical challenges and financial constraints, this man from Odisha, who lost his two-legs in a train accident in 2005, has found a place in the Limca Book of Records for travelling 50,000 kilometres on his motorcycle covering 29 states and five Union territories in 165 days.

This 36-year-old from Rayagada is a double amputee and wears a never-say-die attitude on his sleeves. Despite being a divyang, Gota Satish Kumar is on a record-breaking spree.

On September 2 last year, Satish had set out on his journey on a 350 cc Royal Enfield bike from hometown Rayagada with an aim to better his earlier feat. Worth mentioning, Satish chose September 2 to start the journey as he had lost his legs on this day 12 years ago in 2005.

The MBA graduate lost his legs in a train accident at the age of 26 and underwent surgery for amputation. Post surgery, he slipped into a state of depression. After struggling for months, he bounced back to life with a pair of prosthetic legs and life thereafter has been inspirational.

According to reports, Tollywood star Pawan Kalyan had extended a financial aid of Rs 5 lakh to Satish after coming to know about his inspirational journey. Coincidentally, September 2 happens to be the birthday of the popular actor.

WATCH: Na-anka Durbhikhya: In Odisha, one third of the population died 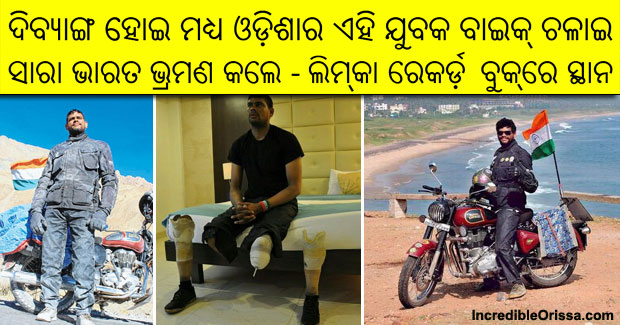