A young doctor working in Odisha’s Maoist-hit Malkangiri district has set an example for others by carrying a pregnant woman from an inaccessible village to hospital on a cot.

Many instances of pregnant women being carried on cots to hospitals by their kin had come to light in the recent past, but Sarigeta village in Malkangiri district witnessed something different.

Reports on Friday said – Dr Omkar Hota who is posted at Paplur Hospital under Chitrakonda block, 150 km from district headquarters hospital, on Wednesday got information that a woman at Serigeta village was complaining serious labour pain.

Without making any delay, Dr Hota along with an attendant rushed to the village that lacked good road connectivity.

Realising that the woman had suffered excess blood loss, the doctor carried out the delivery process at the village. Post delivery, it was decided to take her to the hospital as her condition started deteriorating.

After villagers refused to carry the woman to the hospital, the doctor and the woman’s husband carried her on a cot for 8 km.

The condition of the woman and the newborn was stated to be stable after treatment at the hospital, reports added. 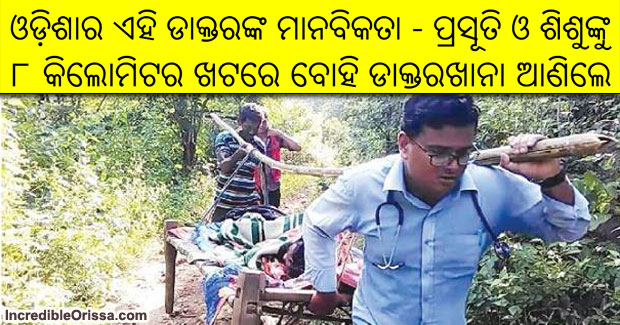