Dongaria Sarpanch Dinja Jakesika of Kurli panchayat in Bissamcuttack block of Odisha was given the Outstanding Women Panchayat Leaders 2016 award by New Delhi based Institute of Social Science (ISS).

After getting the award, Dinja thanked to the dongaria kondhs who supported her in 2012 and said that education and industralisation can bring the development in the region.

National Commission for Women Chairperson Lalita Kumarmangalam said that Dinja Jakesika is a role model for others for taking various steps towards the development of dongaria kondhs in a remote Odisha.

Dinja Jakesika has been successful in sending 200 students to nearby tribal residential for education and 80 students to Kalinga Institute of Social Sciences (KISS), Bhubaneswar and Ram Krishna Mission, Hatamuniguda for better education. She is also instrumental in completing 260 Indira Awas Yojana in her panchyat area while another 400 are in pipeline. 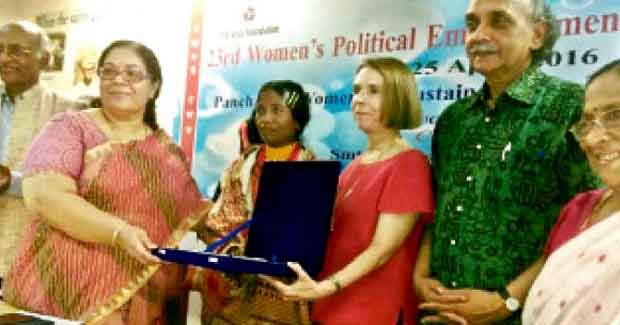