Hrudaya Kumar Das, the 28-year-old son of a BPL farmer from Angulai village in Odisha’s Kendrapara district was ranked 1079 in the civil services examination, results of which were announced recently.

Das’s parents as well as his fellow villagers are overjoyed with the news. “There is no shortcut to success. Where there is a will, opportunities will come regardless of constraints,” Das, whose father supports the family by farming, said.

Though Hrudaya Kumar Das has not been educated in an English-medium school, or had access to extra help, his father had to sell off part of the 1.5-acre irrigated farmland he owned to meet with his academic expenses.

Das’ father tends to his field every day to support his family, and has sent his younger son Rashmi Ranjan to study for an MBA.

“I had studied in the government-run primary and high schools at the village. Later, I did my Plus Two science courses from the Marshaghai College here. I passed with second division marks. My Plus Two results had left me shattered. I was a good batsman. I had made up my mind to pursue cricket. I had represented the district team in the Kalahandi Cup inter-district cricket tournament. However, uncertain future in cricket forced me towards academic spheres. I was admitted to a five-year integrated MCA course at Utkal University. The academic environment there provided me with the boost for trying out my luck in the civil services exam. In two of the earlier attempts, I had failed to make the grade. I have tasted success this time. My parents supported me all along. All these contributed to the civil success,” Das said.

Hrudaya said much before civil service success, he was posted in Jajpur district as Prime Minster Rural Development Fellow (PMRDF). His job was to interact with tribals in Naxlite-infested areas and oversee implementation of poverty alleviation and welfare programmes in backward areas. The Union Rural Development ministry was paying hefty salary for the job assigned to him, said Hrudaya.

Last month, I have got the appointment letter for Assistant Commandant job in Central Reserve Police Force, he said adding his higher study stint in Utkal University motivated him to try out for civil service and intensive subject-wise study helped a lot. 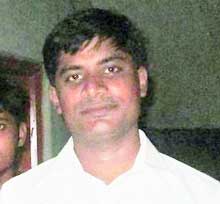 “The members of the civil services interview board had flooded me with questions on Odisha’s poverty, its unimpressive economic growth, industrialisation scenario. Issues such as poor governance mechanism and unfair distribution of social security schemes and pilferage of government grants right, were talked about during the interview. I had managed to impress the Union Public Service Commission (UPSC) board members despite some initial fumbles,” Hrudaya Kumar Das said.

“I believe that sincere labour never goes unpaid. By dint of determination and will power, I had set the civil service target. But for family support, my civil service dream could never have been realised,” he concluded.