In order to ensure speedy trial in rape crimes against women and children, the Odisha Government decided to set up 45 fast track courts in the State.

Of these, 21 courts would be dedicated to cases of rape and sexual harassment of women. The remaining 24 fast track courts will specifically deal with Protection of Children from Sexual Offences (POCSO) cases, Law Minister Pratap Jena said.

The move comes after Union Law and Justice Minister Ravi Shankar Prasad asked the States and the Chief Justices of High Courts to expedite investigation in cases of rape and those registered under the Protection of Children from Sexual Offences (POCSO) Act.

The fast track courts will function under Additional District Judges as per provisions of Orissa Civil Courts Act, 1984. “Once set up, the courts that deal with only rape incidents will expeditiously dispose of long pending cases in the Sessions Courts,” Law Minister said.

The state government’s action comes after the Centre’s decision to formulate a scheme for setting up 1,023 fast track special courts for expeditious trial and disposal of rape cases. 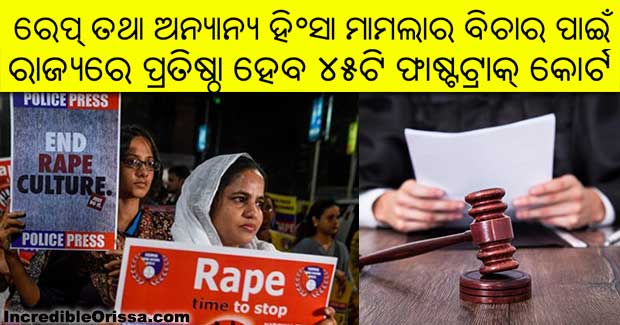