Odisha‬’s first woman engineer and first principal of Bhubaneswar Women’s Polytechnic, Sudhira Das passed away at the age of 83 on Friday morning.

She served the Odisha government from 1957 to 1990 in different capacities. Establishment of Women’s Polytechnic College in Bhubaneswar is considered as a major contribution of her.

Sudhira Das was born in an aristocratic family of Cuttack on March 8, 1932.

She had an extreme passion for mathematics from her childhood. After graduating from Ravenshaw College in 1951, she completed her MSc (Tech) in Radio Physics and Electronics from University of Science & Technology, Calcutta (now Kolkata) in 1956 – a time when education was a taboo for women. 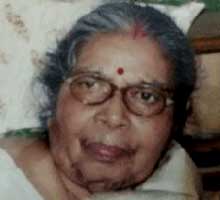 As news of her death spread friends, relatives and eminent personalities flocked to pay their last respects to the departed soul.