Rama Devi Choudhury, adoringly called Maa (Mother) by the people of Odisha, was a celebrated freedom fighter and a social reformer. Born on the 3rd December, 1899 at Cuttack, she inherited a great legacy as the daughter of Gopal Ballav Das and the niece of Utkal Gaurab Madhusudan Das. At the tender age of 15, she married Gopabandhu Choudhury, then a Deputy Collector and later a freedom fighter.

“Maa Rama Devi was an icon of women empowerment in the state. Breaking the traditional world of conservatism with rare sense of courage, she had come out of the closet to dedicate herself to the nation and serve society. Her conviction, determination and dedication to bring about social change and empower women through education are rare examples of courage in those times,” said the Chief Minister.

“Rama Devi Women’s University is established with overall policy objectives of increased participation of women in higher education. It will be an ideal institution that recognizes and promotes gender equality. I hope the University will initiate studies on women’s empowerment, women’s rights, gender equality and studies that will create confidence and enable our young women for forward movement in society. The government will provide all necessary support to this University to stand out as a Centre of Excellence,” he added. 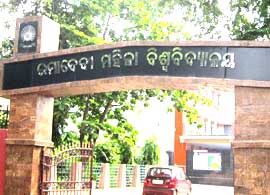 ALSO READ: Break traffic rule in Bhubaneswar, get clicked and then fined by Police