Odisha Chief Minister Naveen Patnaik formally handed over free land titles to 2000 urban slum dwellers at an event in Chhatrapur, Ganjam under a programme that is being hailed as “ground breaking” by many.

According to Housing and Urban Development, Commisioner-cum-Secretary, G Mathi Vathanan two lakhs such titles would be granted by the end December 2018. The project, aiming to benefit a million individuals, promises to cover electricity, healthcare, education, sanitation, anganwadis, skill development needs of these areas But more importantly, provide “self-respect and freedom from the perpetual fear of eviction,” said an official release.

Odisha’s move to provide slum dwellers with modern urban facilities is the first of its kind in the country, the government said. Industrialist Ratan Tata has described the BJD government’s move as “earth-shaking”.

Besides Tata, the event was attended by visionary British architect Norman Foster and state government dignitaries and officials. “Odisha’s initiative will have a ripple effect across the world. It will give a signal to the global community and aid their involvement in this kind of legislation (giving land rights and homes to the landless),” Foster said.

In September of 2017, the state assembly passed the Odisha Land Rights to Slum Dwellers Bill, 2017, under which Patnaik’s government hopes to execute what it claims is the world’s largest slum land titling initiative. 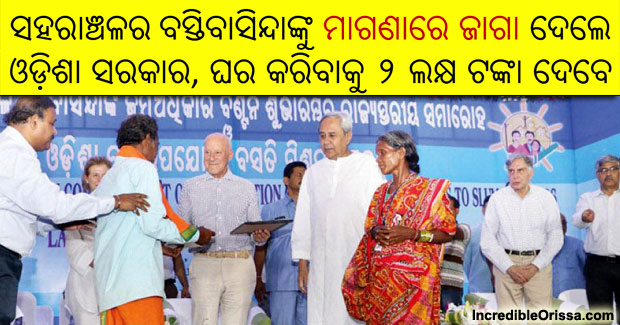