Odisha becomes the first State in the country to address freedom fighters as ‘Manyabar’ (Honourable). This apart, people holding constitutional posts will also be addressed ‘Hon’ble’ at public functions.

According to a statement issued by the Chief Minister’s Office, the State Government has decided to accord due honour to them for their invaluable contribution to the freedom movement.

Odisha Chief Minister Naveen Patnaik also directed to abolish the traditional practice of according ‘Guard of Honour’ and ‘House Guard to the Chief Minister, Ministers and other Government high officials on all the occasions.

As per a press note issued by the Chief Minister’s Office (CMO), “Henceforth, ‘Guard of Honour’ will be accorded to the Chief Guest only on the occasions of Republic Day, Independence Day and Utkal Dibas.”

The freedom fighters have lauded the decision. Chief Minister Naveen Patnaik is trying to project a ‘People’s Government’ by dismantling symbolisms of authority. 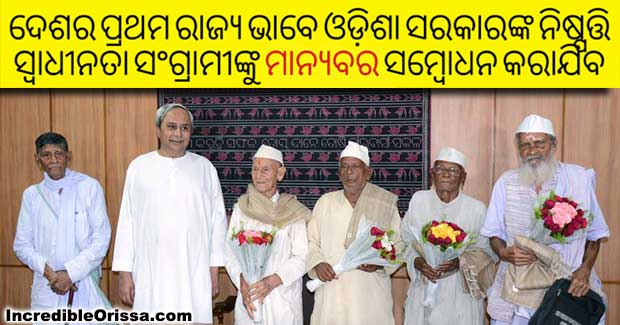