Odisha girl Ananya Nanda entered into the Top 5 of Indian Idol Junior Season-2 on Sony TV and inched a step closer to win the title. Her full name is Ananya Sritam Nanda.

Ananya, a Class IX student of Pokhariput DAV Public School, Bhubaneswar, started learning music at the age of 4 from guru Chittaranjan Pani. She continued to excel in singing with practice and learned the nuances of the Hindustani classical from her guru with active support from her family members. She can sing songs of all genres – classical, modern, rock and pop – with perfection, which is evident from her performances in the show.

“At this point in the show, Ananya needs the votes of the audience to go ahead. We urge everyone who liked her singing to vote for her so that she brings laurels to the state,” said her mother Prashanti Mishra, an insurance professional.

Narrating the musical journey of Ananya, her father Prasanna Kumar Nanda, a senior officer in the industries department, said, “When she was a toddler she won special jury aeard at a function when she did not have any formal training in music. That inspired her to learn music and she has been proving her mettle.”

It may be noted that the second season of Indian Idol Junior commenced from May 30. The season is being aired on Saturday and Sunday nights at 8:30 PM. The series is mainly meant for kids aged between five to 15 years. 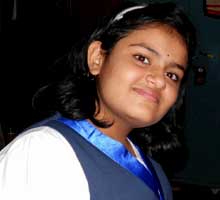 Indian Idol Junior 2 is hosted by Hussain Kuwajerwala, co-hosted by Asha Negi and is being judged by actress Sonakshi Sinha along with Vishal Dadlani, Shalmali Kholgade and Salim Merchant. The winner of the show will receive a cash prize of Rs 25 lakh from Sony Entertainment Television and other prizes from sponsors of the show.

Best of luck Ananya from our side!