A video on social media is becoming increasingly viral. A 4-year-old girl from Odisha, is batting like MS Dhoni and you will think how can such a small child bat so well?

Seeing her batting and craving for cricket, people call her ‘Mahi’, which is the nickname of Mahendra Singh Dhoni. Watch batting video of Sudhruti Rout, who hails from Balasore district.

This 4 year old girl will amaze you with her batting skills 😍😍 she lives in a small village in Odisha and aspires to play for Indian cricket team one day 🏏🇮🇳 pic.twitter.com/F3xTphwzkc

The story of Mahi becoming a cricketer begins with his father, who used to be a cricketer. But due to injury, he did not make his career in cricket.

One day he took the daughter to show MS Dhoni’s biopic. After which, daughter Sudhruti got a taste of cricket. She has seen the film more than 100 times. After watching the shots of Dhoni in the film, he learned to hit six.

Sudhruti started playing cricket at the age of two and a half. He asked his father to record the batting on the camera. His batting on social media is becoming very viral. 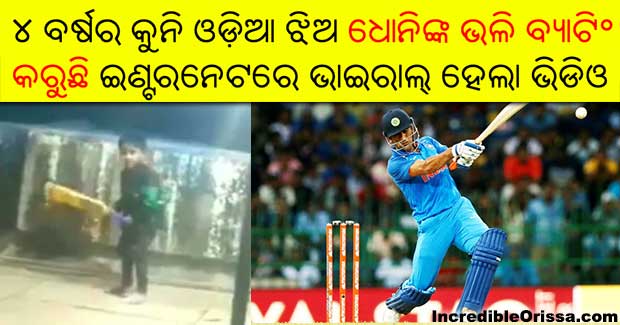