Odisha girl Jhansi Rani Panda of Surisakata village under Baisinga police limits in Mayurbhanj district drives an auto-rickshaw to meet her study expenses and even support her family income.

The 21-year-old girl from Baripada took the unusual step of driving an auto-rickshaw to tide over financial crisis in her family and pursue her higher education.

“There is no point in cribbing about financial constraints blocking our goal. It is better to take them head on and try to sort them out,” Jhansi said.

Jhansi took the daring step when she faced financial hurdles to pursue her studies. Her father Ajay Kumar Panda, a bus driver, found it difficult to manage the six-member family with a meagre monthly income of Rs 6,000. The crisis threatened to disrupt Jhansi’s education. But refusing to relent under the pressure, a determined Jhansi decided to take up auto driving as a part time profession.

Following a month’s training, Jhansi started ferrying passengers in a second-hand auto-rickshaw gifted to her by a relative. Probably, the only female auto driver in the entire North Odisha, she earns around Rs 200 daily.

Initially, the unusual sight of a college girl driving an auto-rickshaw in the small town drew derisive remarks from some, but soon they were drowned in overall admiration for her gutsy stand.

Jhansi hopes her initiative will inspire other women. “If Kalpana Chawla can fly a space shuttle, why can’t we drive an auto-rickshaw?” she added with a smile. Now she is studying Plus Three in IGNOU.

She is named after Rani Lakshmi Bai, who fought valiantly against the British. And Jhansi Rani Panda has the kind of spirit that would surely have made Laxmi Bai proud. 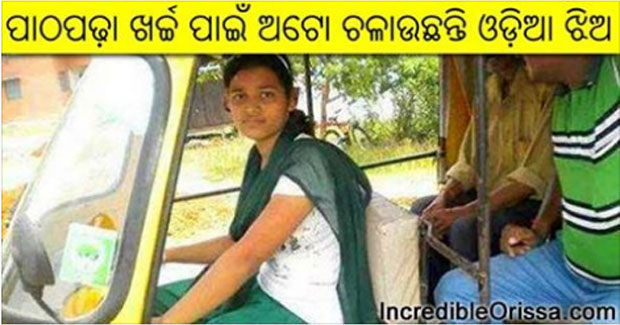