Tejaswani Priyadarshani, a 14-year-old girl from Odisha, has come up with an innovative bicycle that propels on air. Without pedals, the “air bike” can run up to 60km on just 10kg of compressed air pumped into a cylinder mounted on the bicycle carrier.

Tejaswani, Class-XI student of Saraswati Shishu Vidya Mandir of Rourkela, first conceived the idea when she was at a bicycle-repair shop. She saw how the mechanics were using a simple air gun to detangle knots in a bicycle tyre.

“I thought if an air gun can do that, it could also run a bicycle. I discussed my idea with my father who encouraged me a lot and helped me out with equipment to carry out experiments,” said the teenager.

The duo conducted many experiments on bicycles at their home. They bought an air tank with an inlet for filling air. It was fitted with a measuring dial, a starting knob and a safety valve to release excess air.

When the knob is turned on, the air from the cylinder is transferred to the air gun placed near the paddle that rotates the gear with the help of six different blades thus setting the bicycle in motion.

“The bicycle can run for 60km on 10kg of air. The same technique can be used for motorcycles and cars. Priyadarshani won accolades for her invention from many experts,” said Natwar Gocchayat,Priyadarshani’s father.

He added that the bicycle could also be used by the disabled.

“Moreover, people who care about the environment can also use it to cut down on the use of fossil fuels,” said Gocchayat.

If a similar concept is used for a motorcycle, it will not need petrol or diesel since it would be entirely powered by air, Priyadarshani added.

“If the motorbikes run on air, bikers will not have to pay large petrol bills. My prime intent was to create a pollution-free vehicle,” she said.

The innovation holds importance at a time when world leaders are coming together to cut down on the use of fossil fuels derived from natural resources such as coal, oil, gas, petrol and diesel.

“Fossil fuels are produced from old and dry plants and animal remains. They are used in vehicles, industries and for firewood,” said Tejaswani.

Tejaswani Priyadarshani added that she wanted to showcase her invention at state and national-level exhibitions. 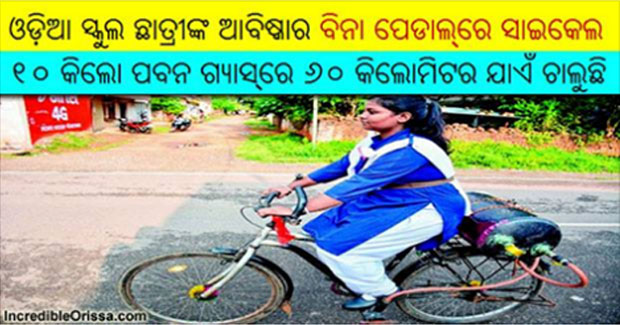