Odisha girl Meghali Malbika Swain (10) entered the India Book of Records (IBR) by naming 165 rivers of the world in one minute.

She also attempted to create a unique record by uttering the names of 1000 rivers in eight minutes, the result of which is yet to be declared.

Meghali achieved the feat at an event held at Odisha Administrative Service Association Bhawan. Biswadeep Roy Chowdhury of IBR attended as judge for spot adjudication of the talent of her. She studies in Standard-5 at the Sai International School, Bhubaneswar.

Popularly known as Google Girl of India, a title given to her in recognition of her excellent knowledge on world geography by Zee News, Meghali has an outstanding grasp over all the mountains, plateaus, peninsulas, islands, deserts, oceans, seas, bays, gulfs, straits, channels, rivers, tributaries, etc.

In a blank world map, she can identify and locate any country or any physical geographical features of the world. She can also speak names of all 196 countries and their physical features, their capitals, currencies, languages, national flags. Besides, she knows origins of major rivers, their flows in countries, tributaries and the cities on their banks, etc.

Meghali has been felicitated by Governor Dr SC Jamir and Baba Ramdev. Her father Prafulla Kumar Swain is an OAS officer and currently working with the Idco. Her parents said unlike other children of her age, Meghali does not watch television much. She can play violin and also paints. “She gives her 100% in whatever she does,” said her mother Nabanita. 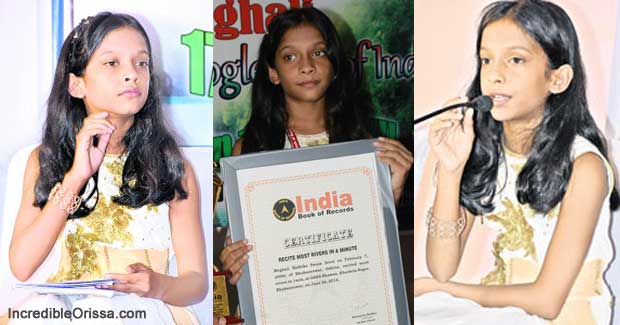