In an act of bravery, a 9-year-old girl in Odisha risked her life as she jumped into a 25-foot well to rescue her 3-year-old baby sister. It has happened in Kendumunda village in Tarabha block of Sonepur district.

The braveheart, Chhayakanti Bagh, is a student of Class IV. Her sister, Mili, accidentally fell into the well while she was playing by its side on June 16. Throwing caution to the wind, Chhayankanti jumped into the well after asking her friends to inform her family members about the incident.

The locals and her family members then rushed to the spot and rescued the duo with the help of a rope. Sonepur district administration felicitated Chhayankanti at a special programme on Saturday.

Collector Dasarathi Satapathy said he had written to the State Government to recommend the girl’s name for National Bravery Award. “The girl deserves the award as she has brilliantly showcased her courage and presence of mind,” he added.

The district administration has decided to take care of the girl’s education. “We will do whatever needs to be done for supporting her education,” the Collector said. 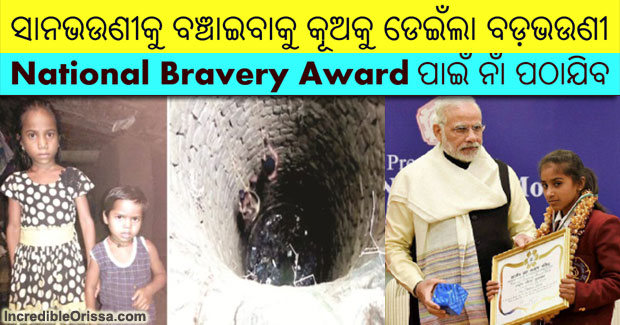