“The state government has been giving top priority to education in the state. The announcement has been made in keeping with the promises made in our party’s election manifesto. This will especially benefit students pursuing Engineering, Medical, Management, Law and other professional courses,” said Chief Minister Naveen Patnaik announcing the scheme at the state secretariat.

Briefing newsmen after the meeting which was presided over by chief minister Naveen Patnaik, chief secretary Aditya Prasad Padhi said the state government has introduced Kalinga Siksha Sathi Yojana which is a modification of ‘Odisha State Interest Subvention Scheme’, it had introduced earlier. Under this new scheme, students of middle class and poor families willing to pursue higher studies within India can avail a maximum loan up to Rs 10 lakh from the banks at only 1 percent rate of interest.

Asserting that he fully understood the financial stress parents undergo in meeting the education cost of their children, Patnaik said the historic and pioneering step of the government will reduce the loan burden of lakhs and lakhs of parents.

This will also financially empower the poor students to pursue their aspiration in higher education, he added.

The state government will meet the fund requirement of about Rs 500 crore from its own resources. 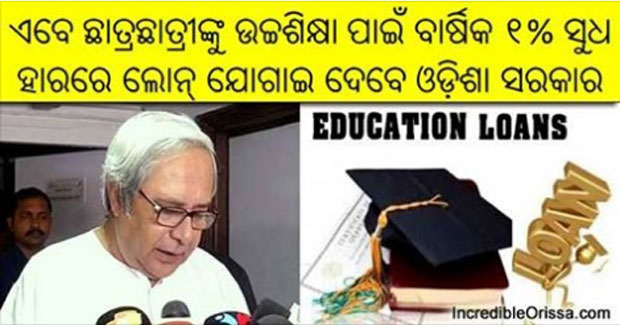